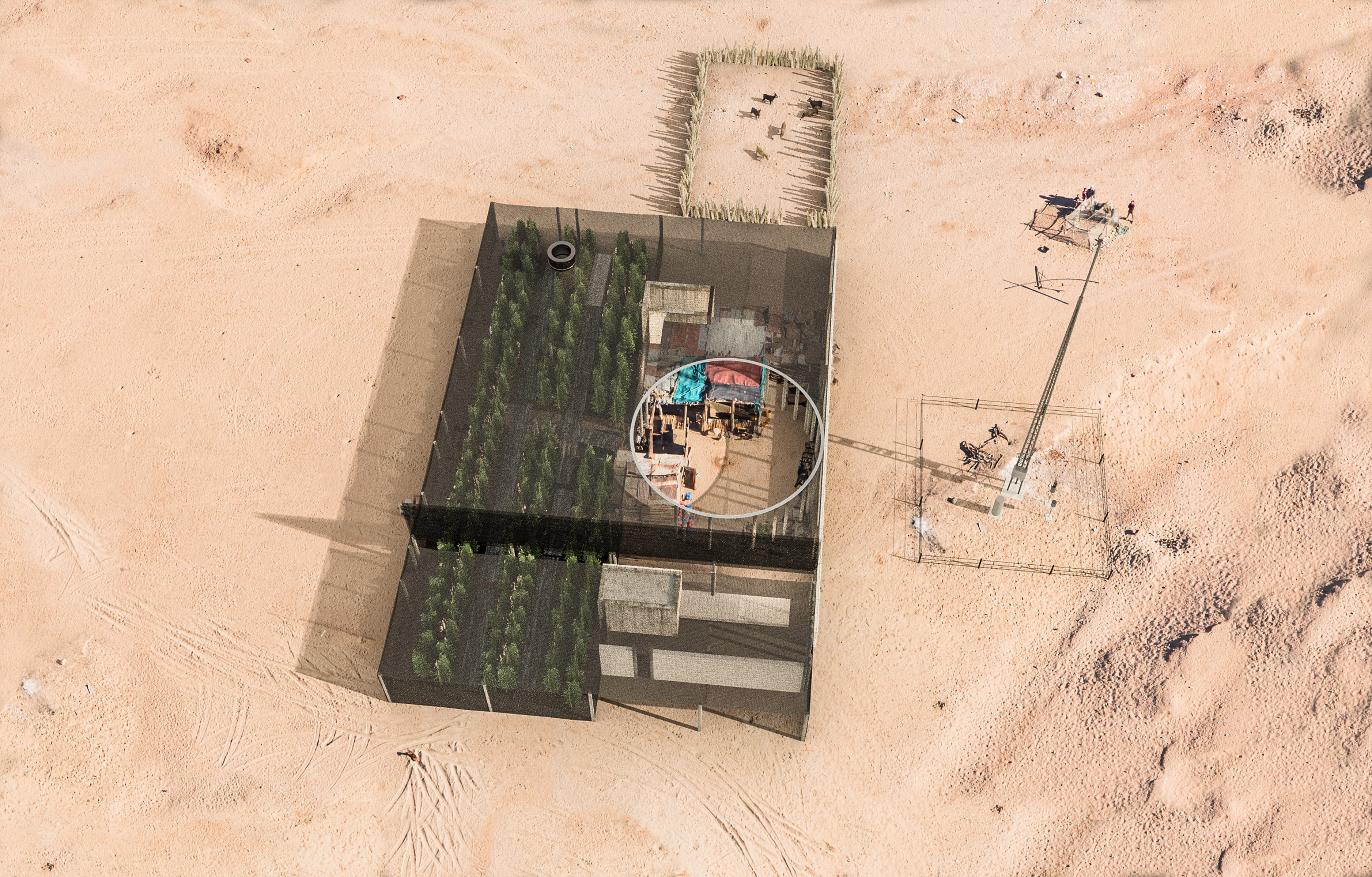 People are mostly water. The more you think about it, the less mundane this classroom fact becomes.

The Southern Topnaar people, a sub-group of the Nama, live in a striking, glaring place: the Kuiseb River Basin in Namibia’s Erongo Region. Their largest settlement is Utuseb, about forty kilometres into the Namib Desert from Walvis Bay. Nowadays, Topnaar houses are typically flat-roofed metal shacks, with animal pens nearby. Although some have sparse greenery around them, most don’t, and small crop gardens are maintained at a remove from the dwellings.

Unsurprisingly, the Topnaar have lived in this area a long time only because of the Kuiseb, which dramatically divides – or splices (take your pick) – immense dunes and sunbaked rock swathes with a riparian ecosystem full of biodiversity. The Topnaar gather !nara melons from spiky bushes in the sand, and source water for households and the aforementioned crops from aquifers. Their livestock, such as goats and donkeys, browse riverine vegetation. But declining rainfall, over-extraction of ground water and related pressures like mining and dams are rendering this social-ecological system increasingly non-viable. And occasional, devastating flooding here isn’t separable from anthropogenic climate change either. Simply put, despite their profound relationship with this environment and survival skills in it, the Topnaar people won’t be able to stay on, as is, much longer.

Consequently, the NAMIB GARDEN HOUSE, developed by ædi founder Dieter Brandt in collaboration with leading urban designer Dr. Rainer Hehl, addresses the demand to handle the ‘stuff of life’ with maximal efficiency in the Kuiseb River Basin – and with potentially great applicability to other marginalized drylands, in the face of global warming.

As Brandt, a Namibian currently living in Germany, explains: ‘Margaret Courtney-Clarke has worked amongst the Topnaar for decades. In a sense I have entered my work through her photography. We visited household families together, and with the help of her green fingers we did some backyard gardening.’ The core of his resultant, systemic solution is mesh technology that harvests fresh water (as specialized flora and fauna have always done) from the massive fog events to which the coastal Namib is so prone. This is integrated with shade cloth over growing plants, and pinpoint techniques such as drip-irrigation, within the Topnaar houses themselves.

Thus, pastoralist-agriculturalists gain a temperate living space that cross-subsidizes ground water with fog water, maximizes its utilization, reduces evaporation, and provides nutrition – plus surplus produce that can be traded locally or sold to numerous tourism sites and other commercial markets in and around Walvis Bay. Through micro-mimicking the entire fog-reliant ecosystem in a Garden House prototype, then fine-tuning the technologies employed, the Topnaar people’s adaptive capacity, and quality of life, can be substantially boosted.

homes can become a productive oases, islands of coolness in the radical heat.

The video for the seminal Talking Heads song ‘Once in a Lifetime‘ features a pulsing liquid – water, amniotic fluid, oceanic psyche – from which a twitchy David Byrne bursts at the start, and by which he’s subsumed in the end, ‘into the blue again, into the silent water’.

What’s it all about in between?

The band’s creations are often open-ended, crossing ideas and rhythms, but pop analysts have suggested that this work concerns greasy pseudo-evangelism versus true spirituality; that it spoofs Western excess-as-success, and more specifically, that pausing to consider your materially-satisfied urban life can bring up a bewildering shallowness.

Apparently, when Byrne eventually discussed it, he said the song was about humans being ‘…largely unconscious. You know, we operate on autopilot, and end up with a house and family and job, and we haven’t really stopped to ask ourselves, “How did I get here?” ‘. But there’s ecstasy in the sounds and visuals as well, as if the pseudo-evangelist maybe worked himself into a real trance by mistake! Indeed, Brian Eno, the producer of Remain in Light (1980), source of ‘Once in a Lifetime’, has described the record as ‘…terribly optimistic, looking out to the world and saying, “What a fantastic place we live in, let’s celebrate it.”‘

Namib Garden House is endorsed by both SASSCAL in Windhoek and the Gobabeb Research and Training Centre, which has extensive experience in understanding arid environments. It is ædi’s proposal that a FogNet station be erected beside the prototype Garden House in Utuseb, to compare local weather patterns with those elsewhere in the Namib. With the help of RainCloud Technologies, which specializes in cloud-based services for remote data access, the station will also capture diverse information from inside the functioning Garden House and publicize it online. This is in the interest of most accurately establishing the prototype’s scalability; not just in Namibia but in Angola and South Africa – or wherever cost-effective housing, offering a sustainable blend of comfort, poverty alleviation and climate change mitigation, is required. Which is everywhere, really, because who in the Anthropocene doesn’t want a truly beautiful house, well-connected to the environment? (Okay, some people would rather buy into temporary, escapist buffers – like a ticket to Mars, perhaps. But there’s that bewildering shallowness again, bubbling up towards consciousness.)

In keeping with the ethos of

‘a lived intersection between nature and technology’,

the Garden House’s Research and Development phase will investigate which crops are best-suited to shade house conditions, taking into account soil and water mineral content, the endemic plant expertise and wider nutritional needs of the Topnaar people, as well as seasonal market demands. The !nara is the plant most associated with the Topnaar, who process its fruit-pulp and buttery pips in multiple ways. But it resists farming, making conservation in the wild even more vital, with particular attention being paid to the ground water it taps and the impact of floods on its harvest.

However, many other Kuiseb River Basin plants have nutritional and medicinal attributes, and should be trialled in the Namib Garden House context for sustainable propagation propensities. Maybe one candidate is the resurrection plant, drunk as a tonic tea, or used by the Topnaar to spice up food, say ethnobotanists Ben-Erik van Wyk and Nigel Gericke in their excellent book People’s Plants (2000). Furthermore: ‘The leaves of this interesting plant shrink and appear to be dead in the dry season, but miraculously turn green within a few minutes after exposure to water.’

Same as it ever was.

‘behind every initiative there is a story’